I've admitted that I was fairly insane when it came to dieting and weight loss up until December of last year, when I realized how far from loving myself I had really ended up. And not only loving myself, but loving those around me, whom I claimed to love fully and unconditionally.
Now that I'm seeing clearly, and have regained sanity in this area, I continue to be amazed by how easy it it is to intuitively handle situations which used to baffle me. (For those of you in recovery, you'll recognize that phrase. Not a coincidence.) 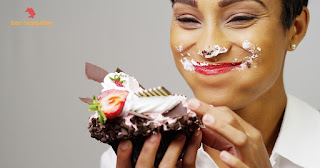 Back during my crazy days, there were situations which really used to throw me completely into a carb-laden tailspin - vacations, holidays, birthdays, road trips, weekends, evenings, illness, celebrations...
I remember a trainer barking at me in frustration that if I was going to keep going off the rails every time I celebrated a birthday in my house, he was going to forbid it. (That didn't go over well with me, as you can imagine.)
The first couple months of quarantine, I didn't face much in the way of temptation. On Easter, I indulged in Easter candy (nothing was off limits, because I wasn't dieting) and was curiously disgusted at how the sugar caused me to go unconscious. I didn't like that and I didn't want it to happen anymore, so I sat down and wrote a list of the things that would comprise my new abstinence:

No fast food or junk food

3 liters of water a day

5 servings of fruits and veggies a day 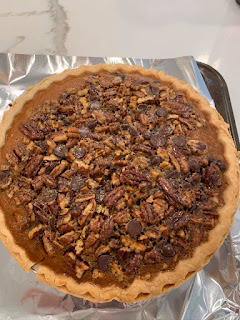 This is when I began baking - sweet potato pecan pie, blueberry pie, cake, cookies and brownies from scratch. I noticed that when I cooked from a mix, even if it was branded "organic," I had some version of the same experience, where the food called to me from the kitchen, trying to convince me to have it at breakfast, lunch and dinner. And maybe a little more even later at night. When I cooked from scratch, that didn't happen. In fact, I could walk by the thing multiple times a day and maybe not have any of it at all.

As the months progressed, I became more willing to look at my calories and macros, and eventually became willing to make sure the calories were coming from healthy foods.

When we realized we were going to have to take a road trip to take my 17 year old to complete a standardized test, I started to get really nervous. So many times, a vacation or road trip had completely derailed my progress. I can remember going to Disneyworld with the best of intentions, journaling about taking my healthy snacks into the park on days 1 and 2, and about eating everything in sight by day 7 - gaining the regular 8-10 pounds by the end of the trip. (Not exaggerating.)

Granted, this trip was only an overnight stay, but the drive was 6.5 hours. I could do a lot of damage in 6.5 hours with snacks bought a roadside gas station. I planned out both days, but that didn't mean anything. I'd done that before.

My day started as any other - two glasses of lemon water, a green drink and coffee. Before we left, I made my planned smoothie with an extra scoop of protein to keep me sated as long as possible. To my pleasant surprise, it kept me satisfied until we pulled into the hotel at just before 5 pm. I felt into what I wanted and ordered it, then plugged it in to LoseIt.com. You can imagine my glee when I realized that my percentages were nearly perfect and my calories too!

I texted Mal to say:

"It was crazy because I didn’t stop for lunch - I had made myself a high protein shake before we left and then when we got here, I ordered what I wanted and plugged it in - not going crazy but not depriving myself - and voila! Is it possible this is becoming second nature??"

"That’s AMAZING!! You’ve come a long way and it’s so awesome. Now you KNOW you’re capable of this and I can tell it’s given you a lot of confidence."

I have come a long way. And it's not just lip service - I can and do trust myself. During this quarantine, I've enjoyed Mother's Day, my birthday, my husband's birthday, Father's Day, July 4 and a road trip, and not only have I not gained any weight, I've lost weight! And more than that, I'm sane and peaceful.